あなた方は、私たちの町に来た平和の天使です！
You are angels of peace for our town! 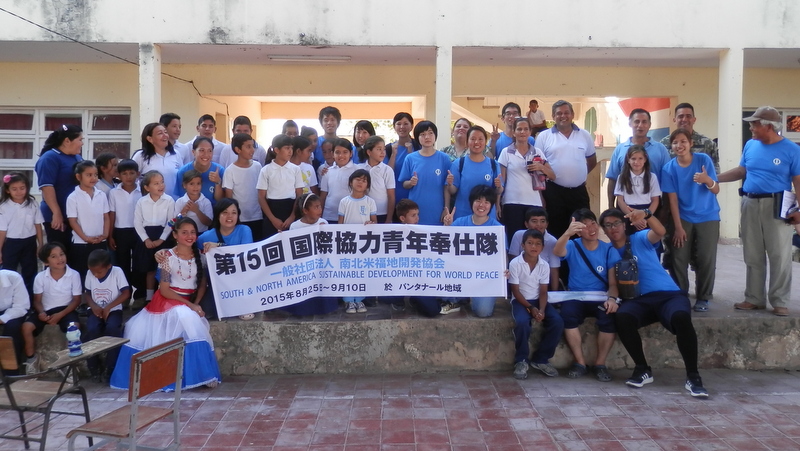 バイア･ネグラ小学校、中・高等学校における感謝会兼お別れの会にて（9月1日）
Thanksgiving and Farewell Session in the Primary School and High School of Bahia Negra, Dept. of Alto Paraguay

The 15th International Youth Service Team, consisting of 4 young men and 8 young women, departed on 25 August at Haneda Airport, Tokyo. After arriving in Asunción, they traveled by bus to Loma Plata, an inland town in the dry Chaco, to visit the Museum of Mennonite pioneers, learn the pillars of their spirit, and see their great milk factory, etc. Then, early next morning, the team left for Bahia Negra in the wet Chaco by another bus via a long and heavily dusty dirt road. After the sunset, they arrived at the Marine Base where the Commander and marines welcomed each of the young volunteers. They offered lodging, meals, and hearty support for the volunteers during four full days and nights then and there.

On 29 Aug. (Sat), the team started to clean the walls of the three classrooms of the High School together with the principal, teachers and students. They polished the whole surface of each wall and applied putty to its cracks before painting it. Meanwhile, they painted all the desks and chairs with shiny oil paint for renewal of beauty and safety. Mr. and Mrs. Marine Commander invited all the volunteers to the birthday celebration of their son (10) in the evening. As they visited the family's home, along with many children of the town, they could see the very busy father serving for their guests coming ones after others. The event was a good opportunity for the Japanese youth to experience Paraguayan family heart in the community.

On 30 Aug. (Sun), the team went to the only clinic in Bahia Negra to paint the outer walls of its building and benches in the meadow around it. The volunteers were merry and energetic as in the High School, painting the wall in white and light green. When finished, the clinic looked much brighter and healthier. In the afternoon, the team went to the school of Diana, in the indigenous community just 5Km to the South. They handed T-shirts, pants, and socks for children to the schoolmaster. He invited them to a club football match Bahia Negra vs Diana. The Japanese volunteers sided with both teams.

On 31 Aug., the team worked together with the High School students again to paint now the inner and outer walls of the three class rooms. They cleaned the floors thoroughly after painting. In the afternoon, the volunteers and students, and primary school boys and girls in addition, had a happy time playing together volleyball, futsal, tag, origami, etc. At the end, they planted young neem trees at the edge of the playground.

On the 1st of September, they held a whole school assembly for thanksgiving and farewell, which began with the National Anthem. The Marine Commander encouraged young Paraguayans to be hopeful with sound dreams like those youth who came to their town directly from far away around the globe. The principal gave a letter of gratitude to our organization for all activities and educational materials donated. Then came singing and dancing time to express heart-felt dearness with bursting hearts and tears. The team left for Leda by boat via the community of Esperanza.

In Leda, they visited the project sites such as agricultural farms, fish farming ponds, Pigland, neem plantation, cattle coral, etc. They experienced fish driving, fish processing, pioneering in the bush, harvesting taro, horse riding, fishing on the Paraguay, star gazing, etc. guided by the loving seniors of Leda staff. After spending four days and nights in Leda, the team moved to Vallemi by a cargo-passenger ship "Aquidaban" and to Asunción via Concepción by minibus. They had many more valuable experiences until the last minute in the Airport Gate. See articles and reflections below. Thank you very much for all your support, this year again!

© Copyright 2015 Association for Sustainable Development in the North and South Americas. All rights reserved.
本サイトの内容の全部または一部を権利者の許可なく複製、配布、転載、もしくは引用することを禁止します。一般社団法人南北米福地開発協会。